Nobody had ever imagined this! America advocates democracy all over the world, but its own President’s supporters ripped apart the democracy in their own country. The mobsters attacked their own Parliament! The question is how so many supporters of Trump gathered to storm the US Capitol?

Allegations of US hypocrisy about democracy are longstanding. The US leaves no opportunity unturned to raise a storm if there is any decision or incident against the will of America in any part of the world. Considered as the standard-bearer of democracy, it has always tried to beat the drum about its commitment to democracy and pose as though there is no greater guardian of democracy than itself. It has also destroyed many countries in the name of this ‘democratic mission’. It threatens everyone. It didn’t even spare the world’s largest democracy India and criticised Indians for allegedly not being educated. Then I had written that all our people may not be highly educated but they are more intelligent. The people of India understand who should be voted to power and when to remove him. The result of this understanding is that the transition of change of power within India has always been a smooth process.

Whatever happened in America last week was a terrible and dark day for democracy. The manner in which Trump was not ready to accept the election results, led to apprehensions that he was planning a conspiracy. He had also said that he would not relinquish power, but no one could have imagined that Trump’s supporters would attack and capture the Capitol. Though the security personnel freed it from Trump’s mob, the image of democracy suffered immeasurably! The way Trump supporters attacked the US Capitol during the crucial meeting which was convened to ratify President-elect Joe Biden’s victory, it seemed clear that everything was pre-planned. Both the House of Representatives and the Senate meet in the ‘US Capitol’ building.

For the first time in 200 years, the US Capitol saw such a furore. History tells us that Britain attacked America in August 1814 and after the defeat of the US Army, British soldiers set fire to the US Capitol. Since then the US Parliament has never been attacked. So the moot question is, from where did Trump’s supporters gather in such numbers? It seems that there is huge unemployment in America right now and by distributing money, Trump raised instigated attackers. Through social media, Trump had been continuously provoking his supporters.

Many lawmakers of Trump’s party have also openly accused Trump of inciting violence. Republican Senator Mitt Romney also condemned the violence, saying that “I am ashamed that the President incited rioters to enter Parliament. I expect my party colleagues to come forward to save democracy.” But the question is, where were these opponents of Trump before? Moreover, now the demand has also intensified that Trump be removed from office even before the transfer of power on January 20. All eyes are on what punishment America gives to Trump. But Trump is planning to forgive himself using the President’s ‘right to forgive’.

From the time of his first election as president and also during the just-concluded elections, Trump has been lying constantly. He consistently presented a bundle of lies on social media. Twitter either blocked many of his tweets or issued warnings of inaccurate or misleading content. Many tweets were ‘banned’ so that no user could like or re-tweet them. And finally, Twitter suspended Trump’s personal account permanently. Facebook and Instagram also imposed many restrictions on his handles. Also we all know how Trump’s live press conferences are being banned by the American media. The media clearly said that President Trump was giving false information, so the broadcast was stopped.

Even on the world stage, Trump destroyed the policies of America. Those who were his friends or were on the way to become friends, also distanced themselves from him. At the time of the Coronavirus pandemic, he even threatened India with action if hydroxychloroquine was not sent to the US. In fact, this man’s attitude has been completely dictatorial. His policies were completely unsuccessful in the case of Afghanistan, Iran and China. He proved to be an unsuccessful president even within the country and to hide all these flaws, he tried to spark a wave of ‘false nationalism’ by giving the slogan of US First. He was under the impression that he had succeeded in his action. It is natural for the leaders who play politics of nationalism to develop this kind of delusion. They cannot get out of their ideological matrix and they do not understand the outside world. Such people do not understand that a section is always alert about the country. The same thing happened in America.

There was a large section of people who understood the fact that Trump was taking America on the path of perdition and hence they defeated him at the hustings. Pseudo-nationalists are still not ready to digest their defeat. That is why they went on the rampage. Now Trump is saying that he will not be present at Biden’s swearing-in ceremony. What a great insult to the time-honoured tradition. I cannot help laughing after hearing such ludicrous statements of Trump. This man made fun of every situation. Now see, Pakistan and Afghanistan, are also mocking at American democracy!

And yes, the greatest surprise is that the US security agencies failed to understand the plan of Trump supporters, otherwise such an incident would not have happened! However, it will take America a long time to erase the terrible stigma that has been inflicted on American democracy. Trump has damaged America’s dignity and credibility to a great extent. 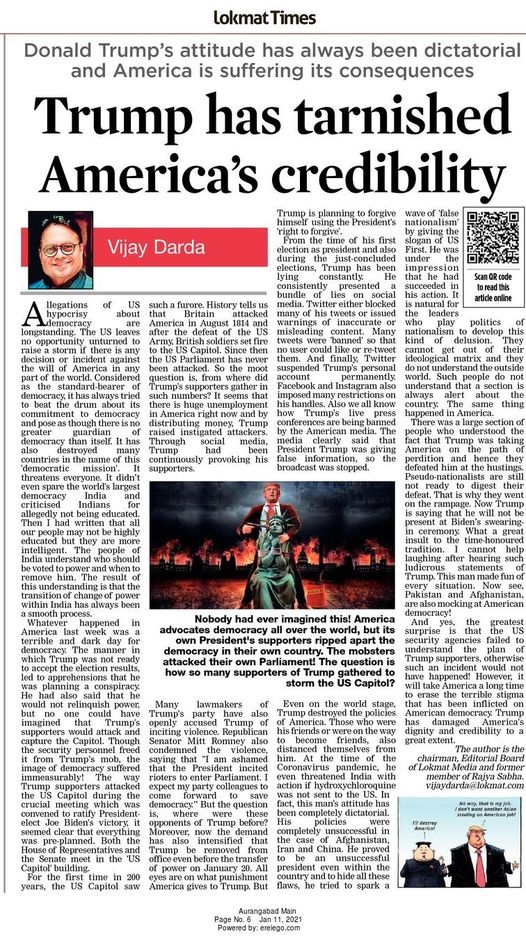