Why are US soldiers camping in Pakistan?

Is it really surprising to see the arrival of US troops in Islamabad from Afghanistan?

When the US soldiers packed up their stuff and took off from Kabul airport ahead of the schedule, everyone felt that they were returning to their country. But within a few hours, the world came to know that these soldiers had landed in Islamabad! Pictures of Islamabad airport and the swanky Serena hotel where the US soldiers are staying started going viral. This raised questions like, what are these soldiers doing here? At first, Pakistan’s interior minister Sheikh Rashid flatly refused to speak, but later he said these soldiers had come on a visa of three to four weeks. However, he has no answer as to why Chinook helicopters are flying over Pakistan.

Sheikh Rashid may be claiming that the US soldiers will not stay in Pakistan for long, but the question is why did they stop at Islamabad instead of returning to the US? Did they arrive suddenly or was it planned like that? Whatever Pakistan may say, but it was almost decided about three months back that after leaving Afghanistan, the US will definitely make its base in some neighbouring country so that Afghanistan can be monitored. Let me remind you that the Commander of the Central Command General Kenneth Messenger had clearly stated some time back that the US was talking to the neighbours of Afghanistan to camp there and monitor the situation in Afghanistan. At the same time, the US acting assistant secretary of defence David Helvi too had clearly said, “we will relocate our forces so that organisations like Islamic State can be monitored to ensure that they do not attack America.” This had given rise to speculations that America could shift its base to Pakistan!

Apart from Pakistan, Afghanistan shares borders with Iran, Turkmenistan, Uzbekistan, Tajikistan and China. Having a base in Iran and China is out of question and Turkmenistan, Uzbekistan and Tajikistan are close to Russia, which has a strong network of its intelligence agency in these countries. So there could have been no better place than Pakistan to set up a base. Pakistan has already given approval for the use of its airspace to the US and it is a known fact that it is the US that is funding the construction of the airbase in Nasirabad, Balochistan. Through this airbase, the US will be able to keep an eye on Afghanistan. Actually, the US may have left Afghanistan, but its sworn enemies — Islamic State and Al Qaeda — are present there and it needs Pakistani land to attack them!

The common perception is Pakistan is going towards China, so why would it allow the US to use its soil? Well, the biggest thing is that in diplomacy there is no permanent friend or enemy. Everyone has their own interests and decisions are taken accordingly. Besides, everyone wants to use the weak man and the weak man seeks everyone’s patronage. Obviously, if Pakistan is weak, it will seek patronage from China as well as the US!

This is not the first time that Pakistan has opened its doors to the US military. In 1959, General Ayub Khan had allowed the US to use Peshawar airbase, which was used to spy on the Soviet Union. General Musharraf had facilitated the use of five airbases to the US from where it was operating in Afghanistan. In 2010, it was also revealed that a contingent of the US Elite Force was secretly camping in Pakistan. The net of CIA is tightly knit there. It was due to this Pakistani cooperation, the US was able to kill Osama bin Laden.

At present, Pakistani leaders may be praising China, but the reality is that the generals of the Pakistani Army have always been pro-US. It is said that the wealth of Pakistani generals is stashed in the US and their children study in western countries. They know that they cannot play tricks with China because China itself is a big tactician. The US can give a lot for free, but if China gives something, it will also seek something in return. Now look at the China-Pakistan Economic Corridor; the work has been stalled for almost two years because China is not seeing any benefit yet. If it gets into Afghanistan, the work will start again, but the US will never want Chinese infiltration into Afghanistan. That’s why it will make every effort to keep Pakistan in its grip! Pakistan is in a state of bankruptcy at the moment. It needs money and won’t lose a moment to fall in the US’ lap if the latter holds out a carrot! The old debt on Pakistan is so much that it is not able to repay the US. Moreover, it needs a new loan too. So the US will try to make the most of this situation! In the current situation, the US can give incentives. It is possible that the $300 million aid Donald Trump had withheld may be resumed!

And of course, the US has faced so much criticism and disgrace after its abrupt withdrawal from Afghanistan that it will try to save whatever credibility it can by deploying its military in the region and attacking Islamic State. If the US troops remain in Pakistan, it can say that it has left Afghanistan, but not the battleground!

As far as India is concerned, we need to follow the same wait and watch strategy. There is a fierce fight between the Taliban, Haqqani faction and the others to form government in Afghanistan. The situation is changing so fast that it is difficult to predict what will happen next! 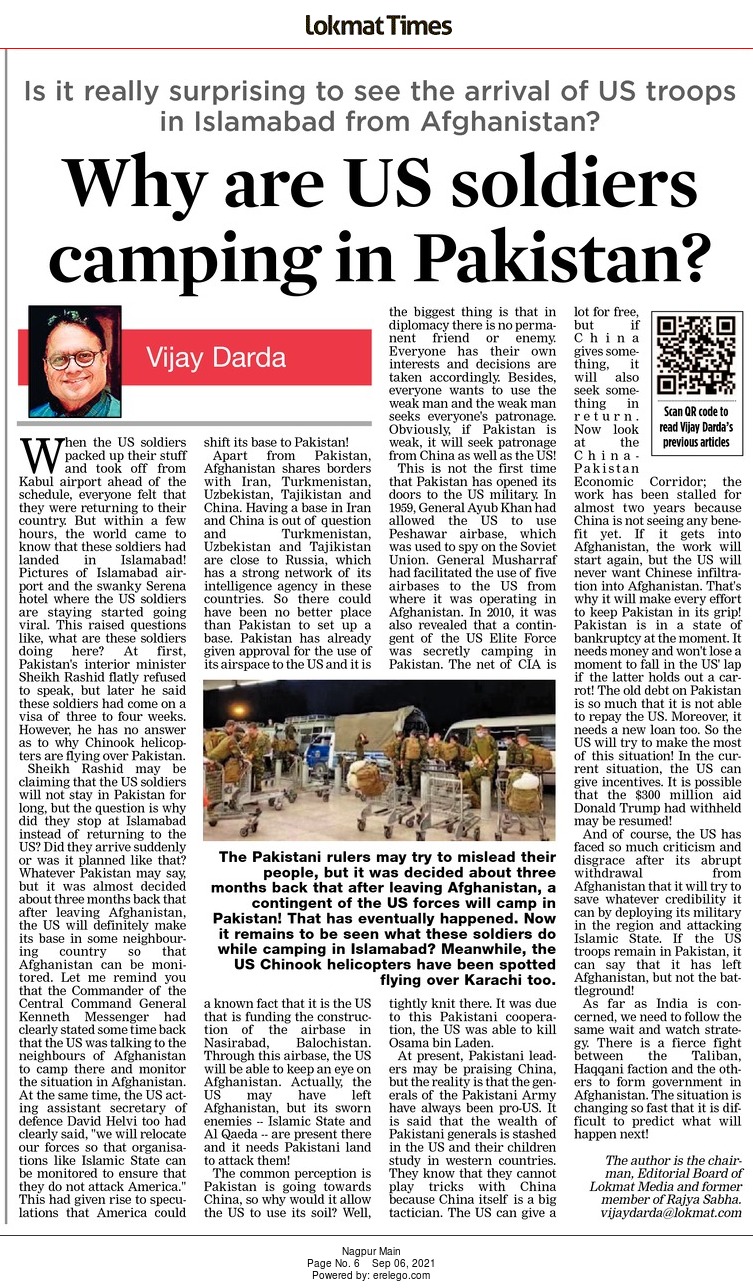 Sushmaji in Islamabad is fine, but why?