Why question fortitude of Congressmen?

Rahul Gandhi says those who are scared are free to leave the party. What does it imply?

Congress leader Rahul Gandhi’s statement that ‘those who are scared should leave the party’ has stirred the hornet’s nest in the political circles. People are analysing why he said that those who are cowards or greedy should leave the Congress. Those who are courageous should stay in the party. This statement of Rahul Gandhi is very clear and it is for the group of 23 leaders who have raised their voice within the party or, in political terms, adopted a rebellious attitude.

Whether you call such leaders a rebel or something else, this kind of voice has not been raised in the Congress for the first time. Such voices have been raised from the time of Pt. Jawaharlal Nehru, Indira Gandhi, till today, i.e. in all eras. Even Indiraji herself had raised such a voice! Some voices were raised against her as well. If we look at the history of Congress, many people like Feroze Gandhi, Chandra Shekhar, Mohan Dharia, Krishan Kant and Ram Dhan raised their voices within the Congress from time to time. At that time, they too were called a rebel. As far as Ghulam Nabi Azad is concerned, he has not done this for the first time. He had raised his voice against Sitaram Kesari and P V Narasimha Rao too. He had also raised his voice while in the Cabinet. Whenever a voice is raised, there are definitely some reasons for it. Such voices should also be heard and the issues resolved.

As far as the exit of Jyotiraditya Scindia or Jitin Prasada is concerned, this is also not the first time. Those who were made chief ministers and ministers by the Congress high command, also left the Congress. Every leader explains the reasons for leaving the party. If Scindia or Jitin have left the party today, I do not believe that they have gone only for power. Along with dedication and loyalty to the party, every leader has his own dignity. No one can suffocate for long. Be it a party, a family or an organisation, there must be freedom to have free thoughts everywhere. This has been the tradition of Congress. And yes, our Constitution has also given freedom of speech.

You must have seen that if the steam does not come out of the cooker even after the whistle, it bursts. Tolerance has its limits. No matter who leaves the party, it needs to be analysed why they are leaving despite their sworn loyalty to the party? If any voice is being raised, its root cause should be pondered over. No one can deny the fact that the Congress as an organisation is in doldrums.

As a journalist, my assessment is that even today Congress has the ability to turn the tide. If the BJP is afraid of anyone, it is not the regional parties but the Congress. The BJP is afraid only of Congress and the Gandhi family. It is afraid of Rahul and Priyanka because they have immense possibilities and potential to revive and rejuvenate the organisation. They have a history, name, faith, sacrifice and austerity. And yes, politics is a game of winning and losing. But if we lose two elections in a row under the leadership of Rahul Gandhi, that too should be discussed and analysed freely and fearlessly.

Dr Manmohan Singh had proposed to Rahul Gandhi to become prime minister. He himself had put forth this proposal in presence of Sonia Gandhi but Rahul Gandhi declined. Had Rahul Gandhi become a minister, prime minister or leader of Opposition, the country would have got to witness his administrative and constructive capacity. But he did not accept any of these responsibilities and therefore, his capabilities did not come to the fore. Now he is unwilling to even take the responsibility of the party. So the BJP took full advantage of all these situations and opportunities.

The entire campaign of the BJP is centered against the Nehru-Gandhi family, for the strategy is all about weakening the powerful, the unperturbed and the leader. If you knock the leader down, the supporters will retreat automatically. This way, the BJP succeeded in tarnishing the image of the Congress, especially the Gandhi family, and the other Congress leaders did not even make any effort to understand the BJP’s game plan. This was the responsibility of not only the Gandhi family but the entire Congress. Congressmen utterly failed to discharge their duty towards the party.

The question is why none of these 23 leaders who raised their voice for reform within the Congress, did not take up this responsibility? Why they did not come forward with full force? Why did these 23 leaders not give a befitting reply to the BJP when it attacked the Gandhi family through social media. They are all senior leaders. Why did they remain mute spectators? The question also is, when baseless allegations were being levelled against Rajiv Gandhi in the Rajya Sabha, was it not the responsibility of the Congressmen to defend their leader? At that time, Jaya Bachchan had to come forward and she protested fiercely while the Congressmen maintained a disgraceful silence.

Congress has to change its approach. The tendency to pull each other’s legs will have to be stopped, only then can the party think of a better future. Congressmen should not forget that only Congress has the potential to provide an alternative. Congress may be in tatters in Uttar Pradesh, Bihar, Gujarat and West Bengal, but it has a substantial presence in all other states. At the national level, Congress has about 30 per cent vote share even today. If it acquires the ability to slice 10 per cent votes of the BJP, it can bounce back to power. No other party has this potential. That is why the BJP is relentlessly attacking the Congress and the Gandhi family. Let the Congress remember just one example that in 1977, despite being completely politically ruined, Indira Gandhi turned the tables in just 28 months. It is possible even today. If only..! 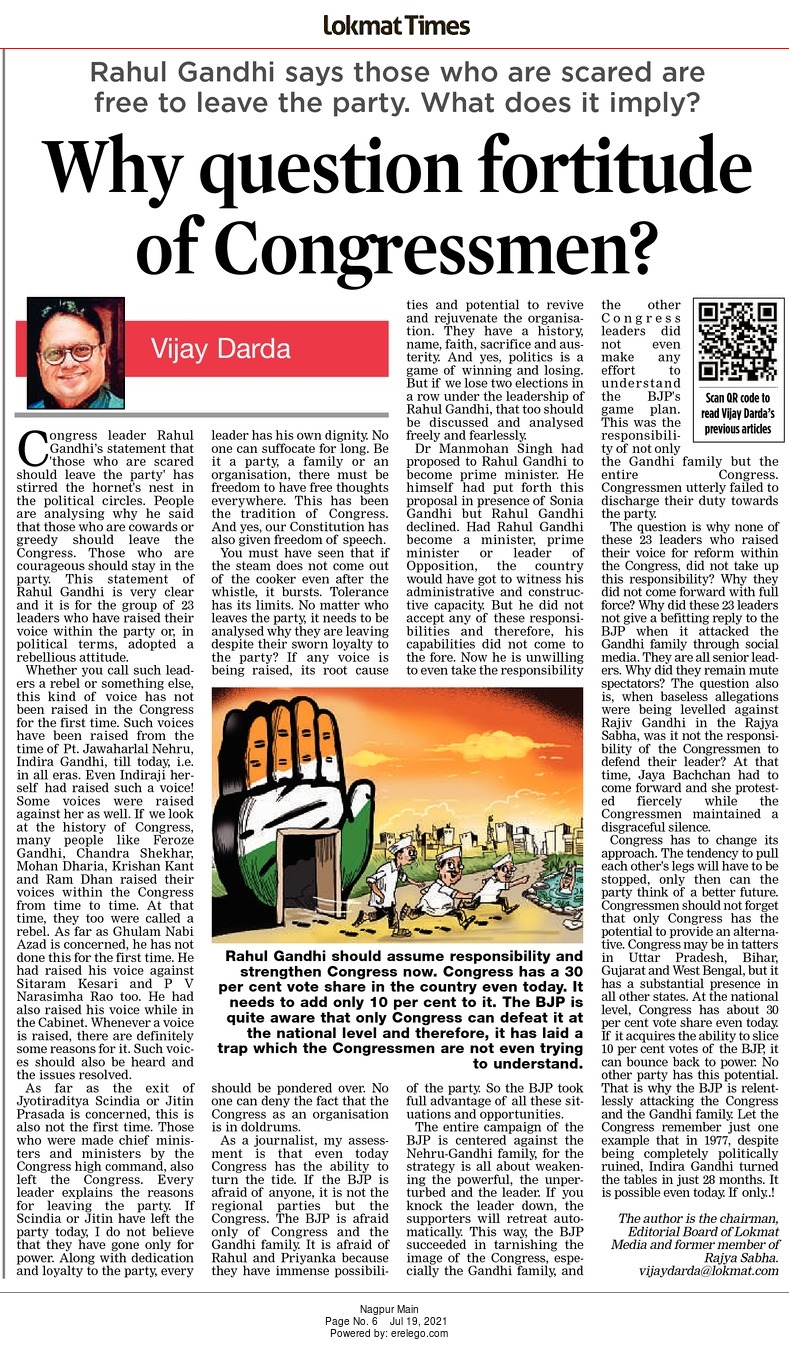