All with a pinch of salt

If the flurry of surveys appearing in diverse publications is to be taken seriously then the UPA-2 has all but lost the next general elections to be held in 2014. Moreover, without getting into the details, the Gujarat chief minister Narendra Modi has also become the prime minister!. The assumed air of authority and finality of these would like us to believe what is left unfinished is the small task of holding the actual elections, and then waiting for the votes to be counted, but the result is a foregone conclusion.

As a parliamentarian, I am glad that the people do not take these surveys seriously, and when it comes to exercising their franchise they do it with their traditional rustic down to earth maturity. So, when the pre-poll surveys do not tire of telling us that the election is going to throw up a hung assembly in a particular state, the people stun the polls and pundits alike by voting a particular party unambiguously with absolute majority. This is the bedrock of our robust democracy.

Now these surveys are telling us that the NDA is gaining and Modi is the hot favourite among the people, and more among the women for the prime minister’s post. For these findings they have also a listed of variety factors against the UPA, and not surprisingly there are references to various controversies that have been seen in the public domain for quite some time.

I do not wish to rubbish the surveys or attribute motives to the publications that are commissioning these, but only wish to add that these must be taken with a pinch of salt. The massive perception management drive that has been undertaken by the Gujarat chief minister Narendra Modi is there for everyone to see. No one is questioning either the drive or its modus operandi. His unabashed ambition to be at the least the BJP/NDA’s prime ministerial candidate, and then ride on this image building campaign to power does not require any political punditry to comprehend. Similarly, the reluctance of his party’s leadership, and that of the NDA partners to bet on his controversial persona is also beyond doubt.

The fact of the matter is that on the basis of available empirical evidence, which is mounting state by state, both the BJP party, and Modi are emerging as losers in the real test. In three state elections from the time the Modi as prime ministerial candidate chorus starting gathering decibels, the party has lost despite his joining the campaign fray. In Uttarakhand, Himachal Pradesh and Karnataka-the BJP lost in spite of Modi’s campaigns, and what is more the much maligned Congress won.

We can make some room for the theory that the Indian electorate is clever enough to distinguish between voting for a state assembly and the parliament, but this is an argument of limited value when tested with the people. In Karnataka, the people had voted out the BJP in the urban local bodies, before dumping the party in the assembly. Similarly, it is nobody’s case that the people are choosing the Congress out of desperation. In Karnataka, there was the former prime minister Deve Gowda’s party vying for a space under the sun, that it too was rejected by the people.

But, these surveys and the involvement of the media houses in their propagation throw up a much larger issue. Should media houses indulge in the blatant projection of a party or an individual on the basis of such thin and controversial evidence? After all, we have found that the methodologies of these surveys are apparently flawed for a diverse country like ours, and unless there is a wave like condition, these masters of predicting public opinion, usually get it wrong. Besides, with the news media taking their cue from the trends that are discernible from the social media networks like twitter and facebook, the next question is whether the manipulation of these outlets is also a fair practice?

It is now an open secret that the BJP and Modi have hired agencies to run their social media networks, and there are paid-professionals, some brought in for astronomical sums of money for running the show. In case of some stories, the tweet of a leader is the starting point for a news story in the media, and if leaders have engaged paid professionals to masquerade as vox populi, then everything needs once again to be taken with a pinch of salt.

The situation becomes more alarming when one goes through the gutter-jargon and the downright abusive language that is used. The liberal argument that these are accepted hazards of the democratization of technology, and hence there should be no restraints, only serves the purpose of debasing the debate, it does not create the sense of fair play that is an intrinsic requirement of any debating forum.

As a public representative and media person, I am all for the use of technology but then my only caveat is that all this should enhance the quality of social debate. We all know that when Anna Hazare was conducting the high decibel Lokpal campaign, both the mainstream media and the cyber driven networks had elevated him to the status of Mahatma Gandhi, and referred to his drive as the second war of independence. At that time, he could do nothing wrong, and the Congress could not take a single correct step.

Now when the atmospherics is over, isn’t this the time to reflect with a cooler mind on the frantic uses of such means, and also to ponder as to what would the same set of devices-the mainstream media and the social networks do if their current hype of Modi and BJP can do nothing wrong, and as usual the Congress is wrong on everything without any exception, does not come true in 2014?

I am not in the habit of making electoral predictions, nor do I want to join the issue with the people and publications conducting these surveys. For them, perhaps it is a part of their business. But these are sensitive times, and then the business needs should be in sync with the national interest as well. The time has come for these players to ponder over the impact of their activities on this aspect as well. 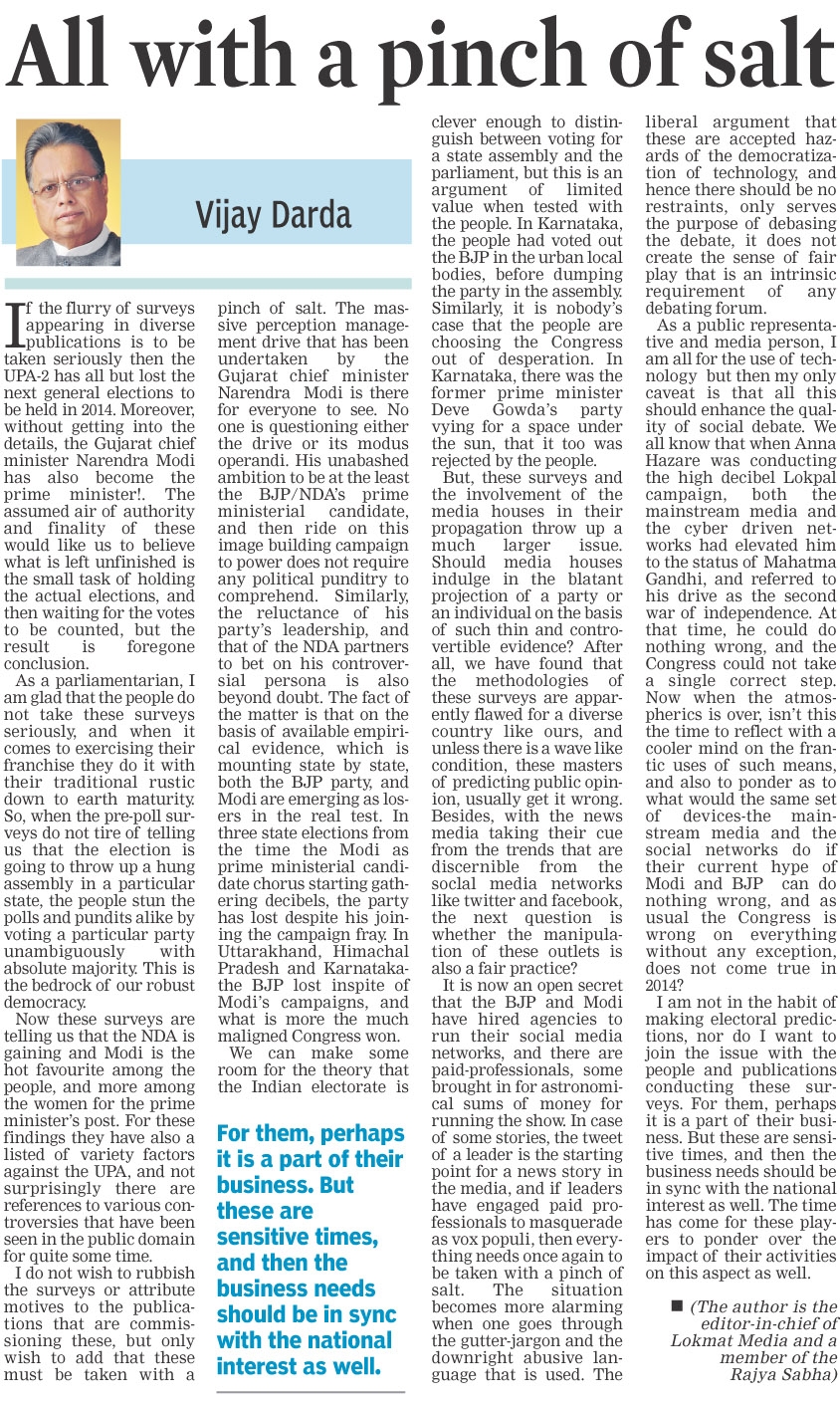