In China-US war, we will be scorched too!

China may be giving empty threats on Taiwan issue but if the situation worsens, it will not be good for anyone

China is furious following the US House speaker Nancy Pelosi’s visit to Taiwan. Someone asked me whether there will be a war between China and the US on the issue of Taiwan. I said I do not think there will be any war. To couch it in the native language, the fight will continue which I do not think will escalate into a full-fledged war. Business drives the world now. Neither China nor the US would want war. But unfortunately, if the war breaks out, the entire world will get engulfed in the resultant fire and India will suffer the most.

Let us first understand what this Taiwan issue is. Why does China want to take it over? During the Second World War, the Communist Party of China was fighting a war with the ruling Nationalist Party of China (Kuomintang). In 1949, the Communist Party of China led by Mao Zedong won and captured the main part of China. Kuomintang supporters fled and took refuge in the southwestern island of Taiwan. Since then, China has been considering it as its part. China got emboldened after swallowing Tibet, but despite being very small in size, Taiwan established its own democratic and technologically rich identity. On the other hand, there is a dictatorship in China. Even the mosques and churches operate underground. China wants to integrate every piece of land in itself.

Thanks to the power of China, only a dozen countries have recognised Taiwan. Even the countries like the US and India have not recognised Taiwan but have maintained relations behind the scenes. The US has also passed a resolution for the security of Taiwan. Despite China’s opposition, it has been selling arms to Taiwan. After Hong Kong came into its fold, the Chinese desire to occupy Taiwan has intensified. From a military point of view, Taiwan’s strength is insignificant compared to China. Beijing has more than 20 lakh soldiers while Taiwan only has about 1.63 lakh! There is absolutely no competition. Chinese warplanes entered Taiwan’s air defence zone several times last year. But the geographical situation of Taiwan is such that the US, India or Japan would not want to let it go into the hands of China. That’s why the Quad was formed. From a military point of view, the South China Sea is of great importance to the countries like the US, India and Japan. Therefore, if China dares to attack Taiwan, there is every possibility of the US jumping into the war. Japan, Australia and Europe will also jump in! In 1996, when tension peaked in the Gulf of Taiwan, the US sent two batches of fighter jets to help Taiwan. The US would never want China to lay its hands on the weapons it has sold to Taiwan.

Taiwan has another large defence shield known as ‘Silicon Shield’. Most countries of the world depend on advanced semiconductor chips made in Taiwan. These include China. If the pace of making these chips slows down, there will be a crisis situation in the world. Let me tell you that only a dozen countries in the world make these chips, but most of the chips are made in Taiwan and South Korea. From mobile to aircraft and space science, all depend on this chip. This chip contains the soul of the devices. Besides, the economic condition of China is extremely miserable at this time. The banking system has been destroyed. In some parts of China, there is a ban on withdrawing money from the bank. Tanks have been deployed on the streets to save the banks from public fury. A lot of resentment is brewing among the people internally and if the situation gets worse, there can be a rebellion anytime. Xi Jinping would never want a repeat of Tiananmen Square-like incident while holding control of the power. Lakhs of youths demanding democracy at this square were brutally crushed by Chinese tanks. When I went to China with P V Narasimha Rao, I visited that square too. When I asked the Chinese about that incident, they said that nothing had happened! The US made up the story!

My assessment is that it will not be easy for China to dare to attack Taiwan. Russia will also stop it from doing so. But this is the world’s diplomacy. No prediction can ever be made here. You don’t know what will happen! If there ever is a war, China would also have to pay a heavy price. Ukrainians have given a fitting reply to Russia. Taiwanese will inflict more damage. The war will destroy the whole world because the war between the US and China will not be a normal war. The war will be fought from Earth to space. The whole world needs to be careful.

India needs to be especially vigilant because both the US and China would like India not to remain untouched by it. However, China is troubling India a lot. Since June last, Chinese fighter jets have violated India’s airspace several times. It tried its best to confuse us in Doklam and Galwan. It wants to capture some of our territories too but it should know that India today is not the one it was in 1962. I have just returned from seeing the strength of the soldiers on the border. Our jawans are ready to beat China too. But still, I hope that there should be no war which will be in everybody’s interest. We are all seeing the damage done to the world by the war between Russia and Ukraine. War ultimately destroys everyone. It pauperises everyone. It’s time to exercise restrain. 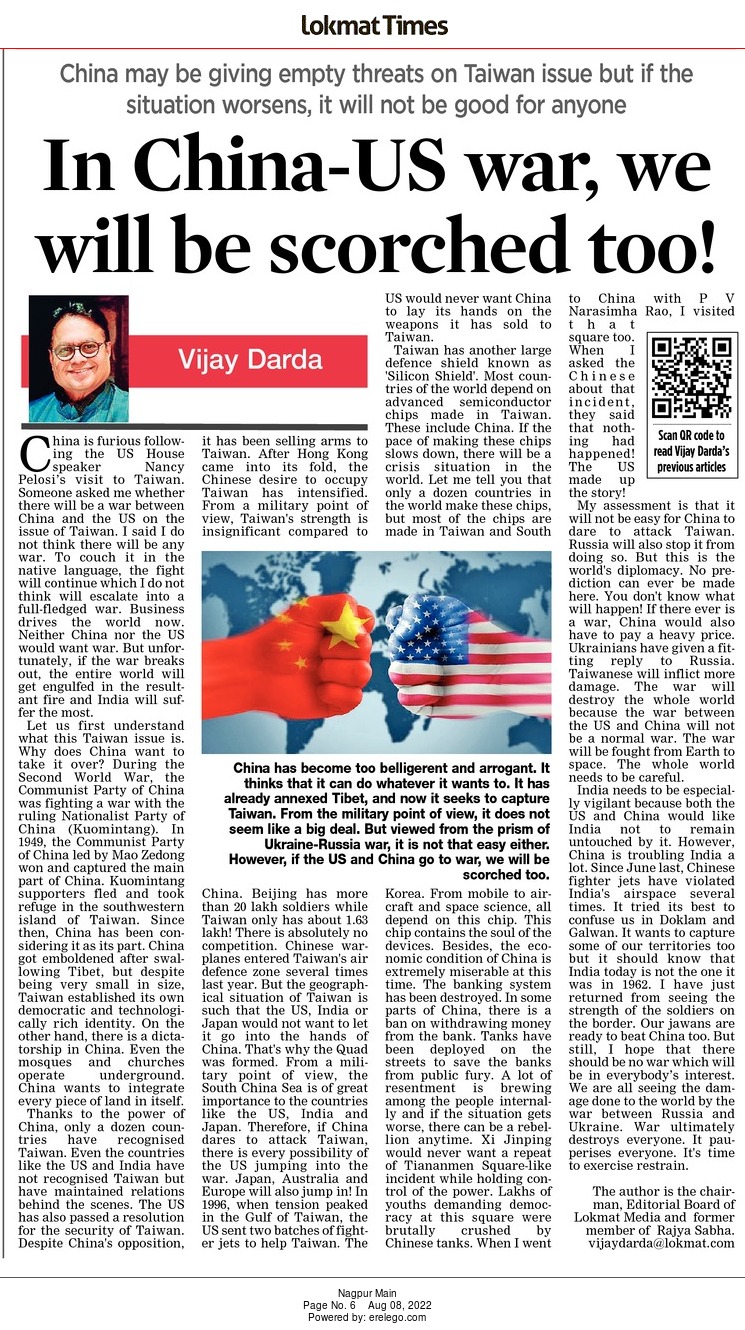 India has opportunity to become a major player