Droupadi Murmu’s elevation to the post of President is an unparalleled social engineering of Team Modi, leaving the Opposition in disarray

Droupadi Murmu, belonging to the Santhal tribe from a backward district in Odisha, is going to occupy the post of President of India today. Murmu’s elevation to the presidency shows the strength of our Indian democracy. Here, the son of a poor tea seller can become the Prime Minister, and then a tribal woman from the most marginalised community can occupy the highest post of President of India.

Last time when Ram Nath Kovind’s name came up for the post of President, people were shocked over this choice. The same thing happened this time too. No one had imagined that the Bharatiya Janata Party would nominate a Santhal woman as the NDA’s presidential candidate! But I was not surprised because I was aware of Murmuji’s life struggle, her work as the best legislator and her work as the governor of Jharkhand. I am also not surprised because I keep trying to understand Modiji’s style. He turns into reality what others cannot even imagine. Fielding Murmu is the result of his foresight. A woman, that too a tribal! Her nomination stumped the Opposition as they had no match for her.

I have been continuously hammering the fact that it is very important for the Opposition to be strong to keep democracy strong. The role of Congress is most important in this process. But I can see that the Opposition is not able to steer itself clear of Modiji and Amit Shah’s grip. Every time, the Opposition gets beaten up badly. What is the reason after all? The reason is clear that the Opposition has no ideology, no planning and lacks vision. By fielding Droupadi Murmu, Modiji trumped the Opposition even before the elections. Tribal Dalits, Muslims and OBCs have been the traditional vote base of Congress. Slowly, everything is slipping away. The Opposition is scattered. On the other hand, Modiji’s BJP is connecting with everyone. The Rashtriya Swayamsevak Sangh has established itself among the forest dwellers while the Congress kept moving away from them.

It is ironic that the Opposition could not find a candidate who could compete with the NDA candidate for the post of President. Sharad Pawar, Farooq Abdullah and Gopalkrishna Gandhi refused to be the Opposition’s presidential candidate. Yashwant Sinha is my good friend. I have always been getting his affection too. But it’s not about the person here. He represents the elite and upper section of Indian society while Murmu represents the larger section standing at the extreme end. Although her score in the elections has been good, it is a matter of concern for the Opposition that there was a split in their ranks. As a result, cross-voting took place during the presidential election.

Let us keep the regional parties aside, but the split in the ranks of Congress is more worrying. A similar split was witnessed earlier in Maharashtra, and now another split took place in the presidential election. In fact, the entire Opposition is still reeling under the impact of Modiji’s masterstroke. On the chessboard of politics, the Opposition has no political tricks of any kind!

It’s not just that. Modiji has executed a strategic move by getting Droupadi Murmu elected as President. It is obvious that not only is the tribal community happy with Murmu becoming the President, but the common people are also very happy. Some 8.9 per cent of the voters in the country belong to the Scheduled Tribes. Elections are to be held in 18 states in the next two years. These include Odisha, Karnataka, Andhra Pradesh, Telangana, Jharkhand, Chhattisgarh, Gujarat, Rajasthan and Maharashtra. It is worth noting that Scheduled Tribes have a significant influence on more than 350 seats in all these states. The Lok Sabha elections are due in 2024. A total of 47 Lok Sabha seats are reserved for Scheduled Tribes. In the 2019 elections, 31 of these seats went to the BJP. The Murmu factor can boost the chances of winning some more seats besides retaining the existing ones. Moreover, Modiji has won the hearts of half the population of the country, i.e. women by bringing Murmu to Rashtrapati Bhavan. It has been evident from many surveys that Modiji is the most popular politician among women. The Murmu factor could only add to the craze! Certainly, Droupadi Murmu becoming the President confirms the right to equality in Indian democracy. India’s credibility will also increase at the world level.

The pair of Narendra Modi and Amit Shah has continuously sharpened the edge of lower-class politics. Earlier, it was believed that BJP is a party of the forward classes. This myth has been demolished by the Modi-Shah duo. The elevation of Ram Nath Kovind from the suppressed classes last time and Droupadi Murmu this time to the topmost post is part of identity politics. This style has helped the BJP a lot in getting itself out of the ‘urban-centric only’ image and acquiring the image of the party that belongs to villagers and the forest-dwellers as well.

It is natural that in politics, everyone will work with their own strategy. What is more important is that the country should keep moving forward… democracy should remain alive. I am proud of my democracy! Welcome and many congratulations respected Droupadi Murmuji! 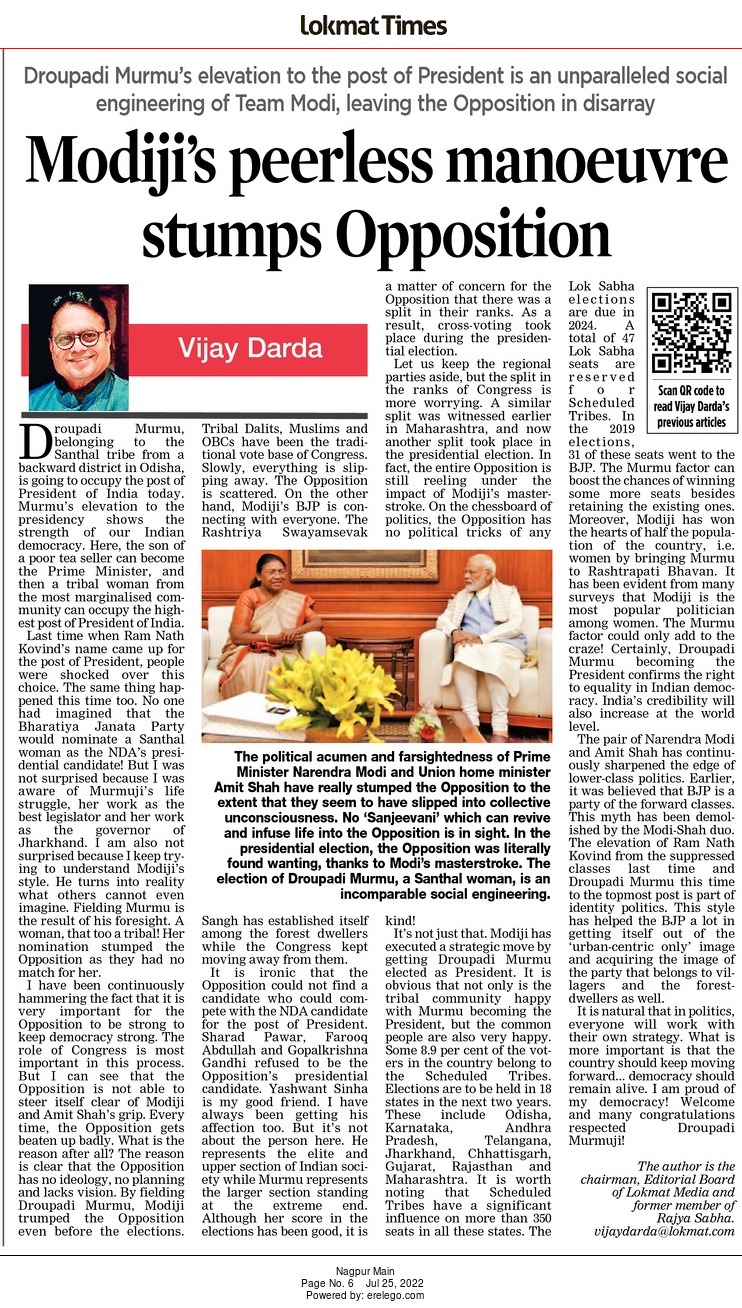 Pakistan! Taliban will destroy you, not us

The spectre of Trump presidency