Now that Nepal is grappling to steer clear of China, will its relationship with India improve?

Not a long time back, it seemed that Nepal had drifted away from us but last fortnight, Samant Kumar Goel, chief of the Indian intelligence agency Research and Analysis Wing (RAW) and the Nepal Prime Minister K P Sharma Oli had a closed-door meeting. After this, Oli greeted the countrymen by tweeting an old map of Nepal on the occasion of Vijayadashami.

This is a big change in the attitude of Oli and the approach of Nepal, because the biggest reason for the dispute between India and Nepal was the latter’s new map projected on the incitement of China, which was favoured by Oli himself and passed by the Nepali Parliament too. In that map, the Indian territory that included Lipulekh, Kalapani and Limpiyadhura were shown as parts of Nepal. Naturally, India rejected it. Oli used to be a supporter of India before coming under the influence of China. Therefore, India’s efforts can reverse Nepal’s stance. It also knows that China has completely captured the resources of the countries in which it has made inroads.

It is unfathomable to find out what the RAW chief advised him, but it seems that some wisdom has been drilled into the Nepalese side that its interests will be best served by maintaining close ties with India. However, the pro-Chinese political class in Nepal is criticising Oli for this meeting. It is also reported that during this visit, the RAW chief also met former prime ministers of Nepal Pushpa Kamal Dahal, Madhav Kumar Nepal and Sher Bahadur Deuba of Nepali Congress but these leaders are denying that any meeting took place. Whatever may be the fact, the RAW chief’s meeting is significant for sure.

However, before analysing the relationship between Nepal and India, let’s consider one more bit of information. Indian Army chief General Manoj Mukund Naravane will visit Nepal from November 4 to November 6 this year. The question is what is the purpose of this visit? In fact, since 1950, there has been a tradition between India and Nepal that both the countries ceremonially decorate each other’s Army chief with the rank of ‘General’. Under this tradition, the President of Nepal Vidya Devi Bhandari will decorate the Indian Army chief with the title of ‘General of the Nepal Army’. This is quite important because Oli was earlier criticising the 1950 peace agreement too. Bestowing the title of ‘General’ on General Naravane would mean that Nepal is maintaining the old tradition. Along with this, during this visit, General Naravane will talk to Nepal Army chief General Purna Chandra Thapa and other top military officials.

It is clear that after the RAW chief, the visit of Indian Army chief General Naravane is going to shock China. India and Nepal share a border of about 1,800 km and China has started capturing Nepal to encircle India. Only at the behest of China did Oli’s attitude become stricter against India. It is only after China captured many villages along the Nepal border up to Tibet that the common people of Nepal and the media there started objecting to it. It is possible that Oli’s affinity to China has decreased after these protests. In such a situation, India’s initiative can rekindle Oli’s earlier liking for India.

The relationship between India and Nepal is as ancient as the Himalayas. A majority of the prime ministers of Nepal were educated in India. Some studied in Delhi, others did so in the Banaras Hindu University or in Kolkata. After becoming a Rajya Sabha member, I lived for the first year in a bungalow at 7, Gurudwara Rakabganj Road in New Delhi. Ram Manohar Lohia, a prominent socialist leader, once lived there as an MP. Girija Prasad Koirala who lived with him too, later became the prime minister of Nepal. When Koirala came to India as prime minister, during the meeting I mentioned about the bungalow. He remembered those days with joy. This is to say that relations between Nepal and India have been very deep-rooted.

The present Prime Minister Oli and other leaders of Nepal also know that China can never be alternative to India. India never harms the sovereignty of other nations whereas China is known for its expansionism. The second thing is that India and Nepal are so much mixed religiously, socially and culturally that the two countries cannot be seen apart. The two countries have a ‘roti-beti’ relationship. The 2019 report of the International Organisation of Migration says that 30 to 40 lakh people of Nepal live in India while five to seven lakh Indians live in Nepal. The brave Gorkhas of Nepal have been immortal in India’s security system. General Sam Manekshaw once said, “If a man says he is not afraid of dying, he is either lying or he is a Gorkha.” The Gorkhas are indeed a shining example of bravery.

Of course, Nepal has been our own brother and it is our responsibility to protect it from the designs of China. Mistakes like the undeclared economic blockade of 2015 have also been committed by us, but now is the time to keep aside the follies of the past. Both the countries should move forward with an open mind and embrace each other. India is the big brother and it should shoulder bigger responsibility. Nepal’s grievances should be redressed and China should be told that Nepal had always been a brother, a friend to India and it will always remain so.

It is a great challenge for India to bring Nepal on board since it has been comfortably ensconced in the lap of China, but there is a ray of hope for sure. The people of Nepal are feeling the danger of Chinese imperialism and the voices of protest are beginning to rise. This is an opportunity for India to seize quickly and bring Nepal back into its fold. 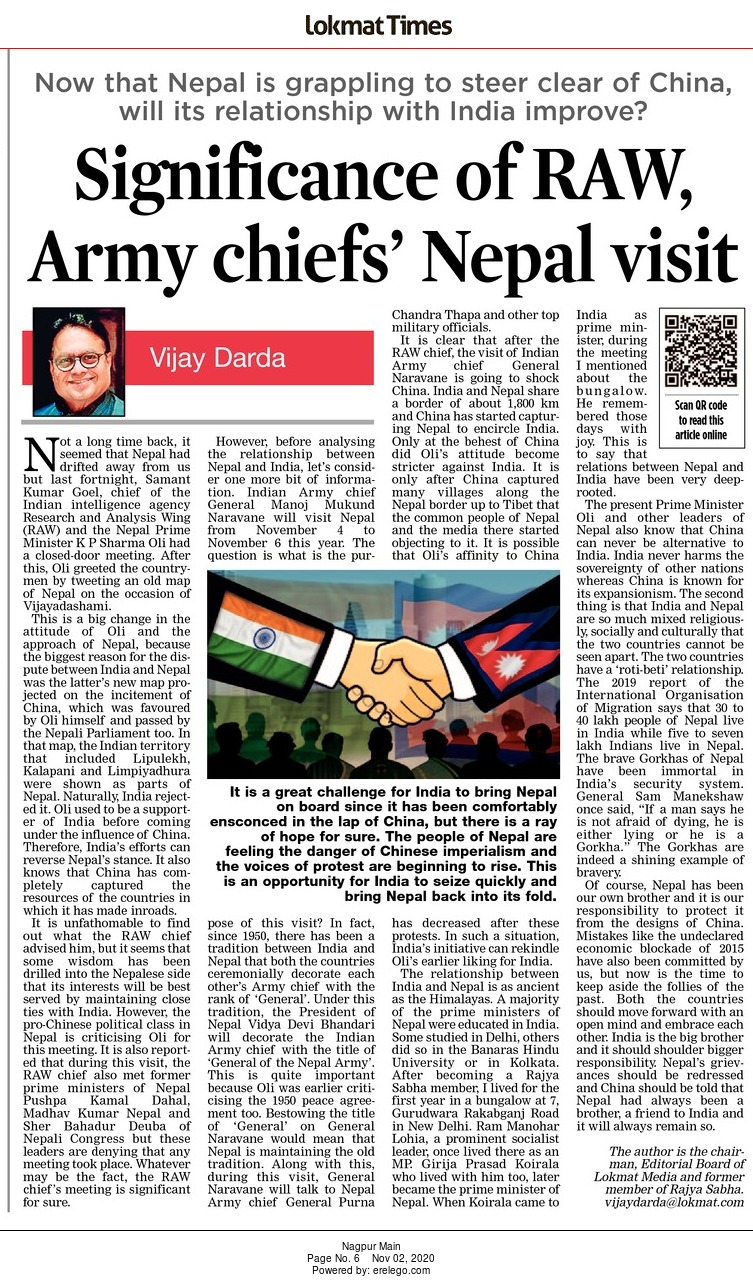