The year that held the mirror to mankind

The year 2020 is coming to an end. Hardly anyone would like to remember this year, but it is also true that history will not forget it. It created and instilled such a terror in everyone’s mind, irrespective of caste, religion or status. The hidden message of the year was that man should not have excessive pride or be self-centric. A gust of wind is enough to flatten the materialistic world and blow away the self-obsessed and the egoistic gentry in a trice.

We may have made calendars and divided time into years, months, days, hours, minutes and seconds for our convenience, but the fact is that there are only three scales of time — past which is gone by, present means the moment we are in and the third is future, the time that no one knows about! Standing on the canvas of the present times, I remember the past which brought the whole world to the brink of extinction. This has been a year of human strength and passion. But I also feel that it has been a year of creativity and adaptability to the times.

Like every New Year, we all had a great celebration in the year 2020 and were looking forward to a great year ahead. Just then the news started filtering in that an unknown virus had broken out in China, but no one had any idea that this year would be so terrible for the whole world! Lakhs of people will die and even superpower America will succumb! The situation went from bad to worse and mankind had no alternative but to confine themselves to the houses. Soon, the hospitals started overflowing with patients with beds falling short to accommodate ever-increasing coronavirus patients. The cremation grounds and the cemeteries began to be full. There was panic all around. Screams of frightened faces started appearing all around. A voice came from somewhere, it urged — you wake up and show your courage and then a team of warriors jumped into the battleground with great courage. The spirit of courage began to instill confidence in fellow humans. This triggered off the campaign to exorcise the fear that had confined man to the four walls of his house.

The way people cooperated with each other is an example of human spirit. A big-time industrialist asked me how is the newspaper faring? I said that the situation is bad, we are struggling. He made a very thoughtful statement: This is the year of being alive, not of doing business. You will earn a lot if you stay alive! Indeed, in this dreadful year, we also saw the creation of patterns of service and passion. We should commend those doctors, paramedical staff and other officials working in the hospitals; the police and the journalists who served the masses without caring for their lives. Many even lost their lives. The whole of humanity is grateful to all such people. There may have been some shortcomings in the initial phase, but after that the dedication shown by the officers under the leadership of the government is praiseworthy indeed.

We saw the migrant workers wearing out their shoes on the way to their native villages braving the severe temperature; we also saw the heroes who came to the streets to help the needy and poor migrant workers. We also saw the dedication of those social and voluntary organizations which set up food joints at various places for the migrant workers. We also saw the passion of the daughter who completed the journey of about 1200 kilometres by putting her father on a bicycle. That dark period is filled with many such inspiring examples. Moreover, scientists from all over the world came together to develop the vaccine to get mankind rid of this ghastly virus.

This is to say that man has proved that when a crisis comes, the whole of humanity unites to battle with it. This not only breeds solidarity but also teaches the importance of keeping patience during a crisis without being distracted. Personally, I can say that managing that time was not an easy task. In all, 3,771 people of the Lokmat family had to be freed of fear and strengthen their mind and heart. They were told that time will come and go but if we are alive today, then tomorrow is ours. Today is the time to be alive. I talked to everyone through technological gadgets, got closer to relatives and friends and renewed my passion for painting which had remained neglected due to professional preoccupations. I also composed many poems and songs. In this way, by using my own creativity, I used the time well. Certainly, many people found such a path and played an important role in the war against Coronavirus pandemic.

And yes, this year was full of challenges but it also taught us a lot! There is no harm in saying that before the outbreak of the coronavirus pandemic, most of the people did not pay any attention to cleanliness despite several awareness campaigns launched by the government. However, the pandemic has changed the situation. This consciousness towards cleanliness is the biggest gift of 2020. A few months of lockdown gave nature a chance to blossom and flourish again. Pollution vanished into thin air! The sky became so clear that the Himalayan mountain range started to appear from hundreds of kilometres away, but unfortunately as soon as the unlock began, we have started destroying nature again.

A strict policy is needed in the country against polluters. Those who spread pollution deserve punishment. There are irresponsible people who throw garbage here and there, pollute the air by burning garbage, cut down trees and slaughter animals and birds. If stern action is not taken against them, they will put the society into a serious crisis. Strict measures need to be taken against industries or businesses which are causing pollution. I would insist that the government should enforce a lockdown for a week every year so that nature can breathe easily.

The year 2020 reminded us that our Indian culture is the best. Greeting with folded hands is a great example of the importance of social distancing. Now, people in other parts of the world are not shaking hands but are greeting from afar. This year really taught us a lot. To be honest, it has held up a mirror to man to point out what the status of man before nature is. It is a matter of happiness that man has once again succeeded in this test of strength and passion.

So, be healthy, be happy. Take care of each other. The new year is about to bring new hopes. Wishing you the best of everything in the New Year! 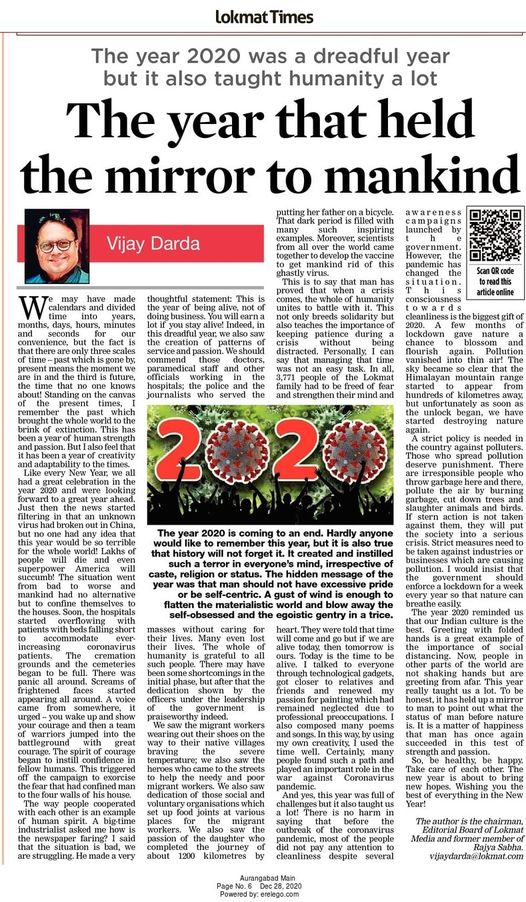