Union minister for railways, transport, electronics and information technology Ashwini Vaishnaw has assured Chairman of Editorial Board of Lokmat Media and former member of Rajya Sabha Vijay Darda that he would direct the authorities to find out the reasons for the delay in the Wardha-Yavatmal-Nanded railway line project — which has been stalled for 13 years — and put the project on the fast track.

In the last 13 years since the project was approved, Darda had personally met 10 Union railway ministers several times and corresponded hundreds of times over the stalled railway project and also demanded construction of a park on 23 acres of railway land in Yavatmal.

The railway project, which would be a lifeline for the tribals, farmers, poor and the general public, should be implemented as early as possible, he said.

As a member of Rajya Sabha, Darda used all his parliamentary rights in the upper house and raised the Wardha-Yavatmal-Nanded railway project issue in the House.

The process of land acquisition from Nanded to some areas of Yavatmal and from Yavatmal to Kalamb is moving at a very slow pace. Darda also pointed out that the concerned authorities should be instructed to speed up the land acquisition process. The railway minister immediately called the concerned officials and asked them to submit all the information as to why the project was delayed.

The minister then assured Darda that his ministry will focus on the project and accelerate its work.

Vijay Darda thanked Ashwini Vaishnaw for promptly instructing the concerned officials to take immediate action on the railway project and the park. Praising the minister, Darda said, ‘I have met many ministers on the project but the way you realised its seriousness and gave immediate instructions to the officials shows that you are an ‘action-oriented minister’.

Park on railway land in Yavatmal

There is no prominent park in Yavatmal city and Vijay Darda has been pursuing it for many years to set up a park on 23 acres of railway land for the benefit of Yavatmal denizens.

The railway park will provide better facilities to the people of Yavatmal. However, the place is constantly being encroached upon. The ‘bhumipujan’ of the park was done by the then railway minister Mallikarjun Kharge, Darda said.

When Darda drew the attention of railway minister that the park has not been developed, he discussed the matter with the officials and promised to develop the place and use it properly. 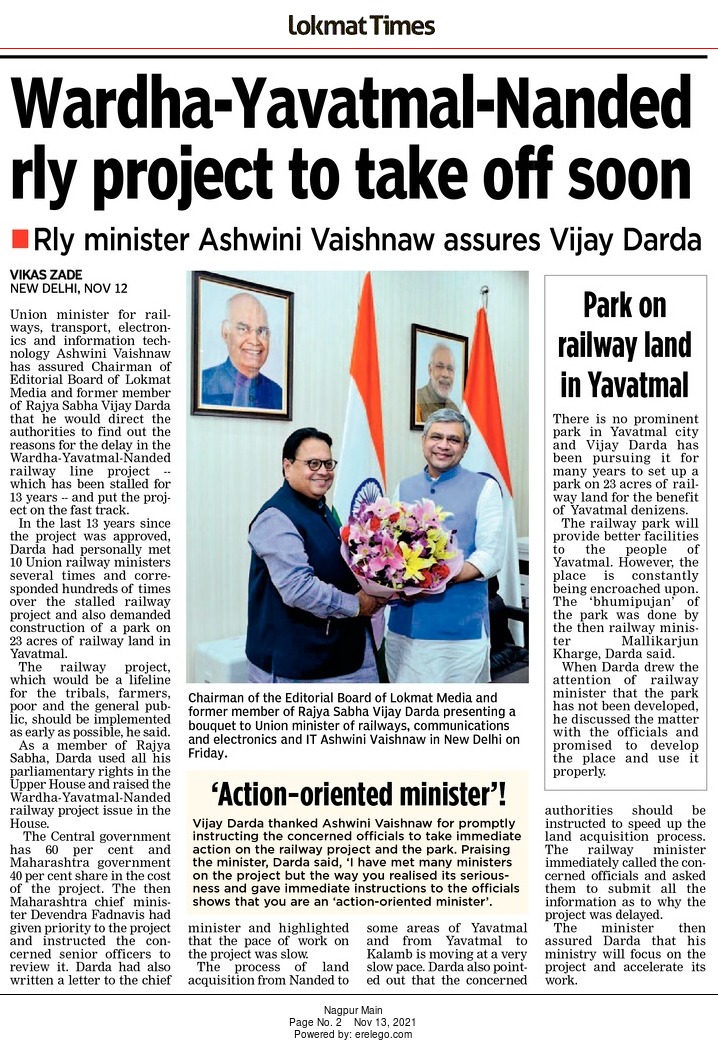