Ensconced in the lap of terror, a frustrated Pakistan trying to browbeat India for its own failure in cricket

Dear Imran Khan Sahab, I can understand your pain. Just before the match, if New Zealand returns to their country saying they cannot play because there is a threat of a terrorist attack, and if England refuses to come ahead of the tour, the embarrassment it causes to Pakistan is quite natural. It is certainly a matter of great shame. Besides, the profit that would have been made from the match, which would have filled the pockets, was also gone! It is an instance of misery worst confounded! Therefore, the discomfort and pain are natural.

When the New Zealand team was returning, I was thinking that you would say something about the terror situation in Pakistan. Pakistan, which is on the verge of ruin, will talk about reforming the Pakistan Cricket Board. Instead, your information minister Fawad Chaudhry did not know from where he came up with a bundle of lies stating that the device and email ID used to send threatening messages to the New Zealand cricket team are being operated from India. He even blamed someone called Omprakash Mishra from Mumbai! I could not understand how the information minister of a country could do such a stupid thing. As if this stupidity was not enough, the chairman of Pakistan Cricket Board Rameez Raja started saying that everything is a trick of the Board of Control for Cricket in India! The situation is worse in your country, your army and ISI are patronising terrorists and you are blaming India? Have some fear of God!

Now you are saying that India is controlling world cricket. Yes Khan Sahab! Of course, India has control over world cricket, for only those who are capable and whose players perform well for the nation wield control. I am specifically using the word ‘nation’ here. You may not understand this, so let me remind you of Kerry Packer. Between 1977 and 1979, when Kerry Packer had formed many of his teams, all the players of Pakistan had gone with him. Don’t you remember! You were among them too. Khan Sahab, not a single player from the Indian team went with Kerry Packer at the time because the pride of playing for the nation is more important to our players than money. As far as Pakistan is concerned, also think about how many of your players live in Pakistan and how many live abroad. You too used to spend more time abroad! Let me also remind you of the spirit of Indian cricket. We tasted our first Test cricket victory against England from whom we learned to play cricket. And yes, your forefathers of cricket must have told you that it was Pakistan against which India won its first Test series.

However, now let me tell you how the Board of Control for Cricket in India became so strong that world cricket came under its control while your country remained oblivious. First of all, the Board of Control for Cricket in India has been an independent organisation since its initial days. The way it was managed, especially in the last 30-40 years, is unimaginable. After winning the World Cup in 1983, money started coming to us. When the economy of our country improved, more money streamed in. We put this money to good use. Today, we have good stadiums in every state. Cricket is played from Kashmir to Kanyakumari. There are good sports facilities from school to university. The children who excel at that level join the state teams. After that players pass through levels like Duleep Trophy to Ranji Trophy. We groom players at every level. If our 11 players play, countless players are in the back rows who keep awaiting their turn. We have created a great structure of cricket in the form of the IPL. Opportunities have been made available to players around the world. It is a different matter that due to the antics of Pakistan, we do not give place to your players in this tournament.

You yourself have been saying that Pakistan should also have cricket infrastructure like India! Now you are the Prime Minister, so why don’t you do what you have been saying. Sir, you have government control over the Pakistan Cricket Board and the situation is chaotic. Politics has permeated everywhere. Your domestic cricket stands ruined. The players who are able to make it to the top, do so owing to their own hard work. There is no grooming. Forgive me if you feel bad, but there is a lot of arrogance in your cricket players too. Arbitrariness prevails. You must remember that you yourself retired thrice! You were a bowling superstar in 1992 but it is a mystery why you said that I will play as a batsman and that if I want, I will bowl! Khan Sahab, no player has ever shown such arrogance here.

We have no ego even at this point when we are running world cricket with our own money. We believe in promoting cricket. If the New Zealand team left just before the match and the England team did not turn up, it is not our fault. Pakistan has committed the sin of making itself the sanctuary of terrorists. Have you forgotten the dark wretched day of March 3, 2009 when the Sri Lankan team was attacked by terrorists in Lahore. Six players were injured and 8 people including 6 jawans of your security agencies were killed. So how can anyone trust you? Take a look at your own past, Khan Sahab! Who knows Indian cricket better than you? Still you are using incriminating language? Is this your political compulsion or are you under some political pressure? For, this cannot be the language of a player! 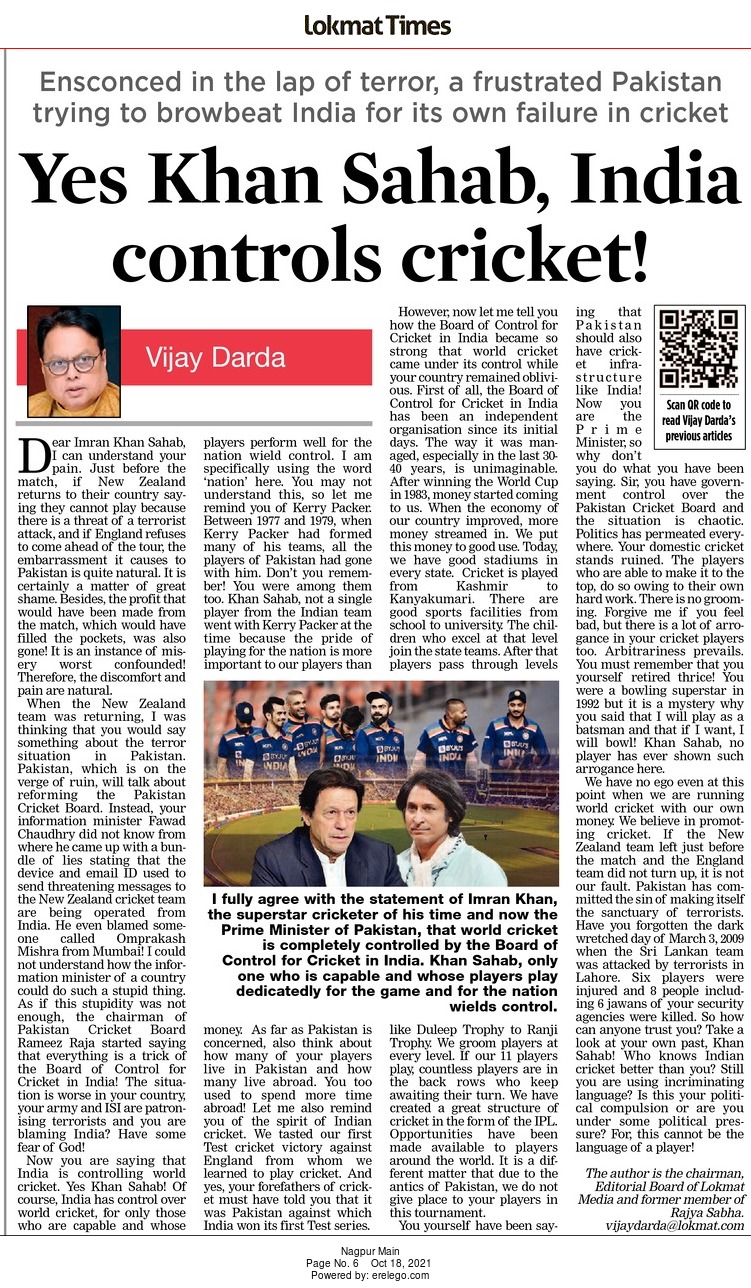 A salute to strength, hope & spirit of victory!

When will you change, when will the country transform?