The ambitious Wardha-Yavatmal-Nanded railway project which is expected to accord fast connectivity between Vidarbha and Marathwada regions of Maharashtra with a potential to bring these backwards regions of the state into mainstream of development has once again become a victim of red tape. This railway project was announced in February 2008. On February 11, 2009, the then railways minister Lalu Prasad Yadav performed bhoomipujan. Even as 2021 is going by, this railway project is yet to take off. During this period, the cost of the project has escalated from Rs 274.55 crore to Rs 3,168 crore. According to the financial framework of the project, the Central government has to bear 60 per cent cost of the project while the share of the state government is 40 per cent. The State government has claimed that it has given Rs 574.65 crore to the Central Railway while Rs 650 crore remain to be paid. However, the railways has not raised a fresh demand for funds from the State government. This is why the project is lying in the cold storage as the Centre, State government and the railways are pointing fingers at each other for the avoidable delay in its execution. Against this backdrop, the Lokmat Times discussed various aspects of this project with the chairman of editorial board of Lokmat Media and former member of Rajya Sabha Vijay Darda who is quite passionate about it. He is constantly doing correspondence in this regard and has raised this issue in the Parliament on numerous occasions. In his undaunting observation about the project, Vijay Darda told Lokmat Times that the project can go on stream soon if all the stakeholders exhibited will power.

Q: As the project is yet to be commissioned, do you think people’s representatives from Vidarbha and Marathwada have been ineffective?
A: The project would enhance connectivity between backward regions of Vidarbha and Marathwada. However, people’s representatives from the region are not enthusiastic about it. They did not even speak in a strong voice about the project on the floor of Lok Sabha and Rajya Sabha during a discussion on the Railway Budget. The MLAs are quiet too. Under such conditions, adequate pressure cannot be mounted on the government. Prime Minister Narendra Modi in a scathing observation on November 16 in Sultanpur said henceforth projects would not be coming up in the constituencies of the ministers, but only wherever they are necessary. It is expected that people’s representatives from Vidarbha and Marathwada would understand the importance of this project and consolidate their voice in this regard.

Q: Do you see politics in the non-completion of the project?
A: I would not like to discuss whether there is politics or not in non-completion of the project. However, given the status of the project, one feels that there are people who are putting brakes in its timely completion. The reasons may be political, but those who are doing it should know that there should not be room for politics in development. Lalu Prasad Yadav, who was the then railways minister, performed bhoomipujan of the project in February 2009. Since then, India has seen 10 railway ministers including Nitish Kumar, Ram Naik, Mamata Banerjee, Dinesh Trivedi, Mukul Roy, C P Joshi, Mallikarjun Kharge, Sadanand Gowda, Suresh Prabhu and Piyush Goyal. However, no progress was made in taking the project to its logical conclusion. Now, Ashwini Vaishnaw has taken over the charge as railways minister. The area is considered backward, particularly Yavatmal district which is known for farmers’ suicides. Had this project been completed on time, the new industries would have pitched their tents in the region, bringing in development and creating job opportunities. The swelling number of suicides could only be stemmed by starting agro-centric business activities. Hence, keeping in view the welfare of common people, all stakeholders must come forward and work unitedly for completion of this dream project.

Q: Should Nagpur Metro run up to Yavatmal?
A: Definitely. In fact, it is the brainchild of Union surface transport and highways minister Nitin Gadkari that Nagpur Metro should be connected with other cities of the region. There is no broad gauge Metro railway in any other part of the country. Hence, if services of Nagpur Metro are extended up to Yavatmal, the travel to Yavatmal would be easy and comfortable. There would be a fewer number of vehicles on roads which would bring down pollution. Currently, there are passenger trains in operation. However, their condition is far from satisfactory. There are no fans inside the coaches and the toilets are in bad shape and unusable. Extension of Metro would however, make eminent sections of the population travel by Metro, thus bringing about all round development of all stakeholders.

Q: In the initial stages of the project, the share of State government and the Centre was 50 per cent each. But with your efforts, the share of the Centre was hiked to 60 per cent while that of the State government was brought down to 40 per cent. Do you think efforts are also underway to accord special status to the project?
A: Following the announcement of the project, there were some issues regarding sharing of cost by the State government and the Centre. At that time, I went to New Delhi with the then chief minister of Maharashtra Vilasrao Deshmukh where a meeting was convened with the former railways minister Lalu Prasad Yadav. Vilasrao Deshmukh, in view of the poor financial condition of Maharashtra, was not willing for equal (50 per cent) cost sharing by the Centre and State government. He then put forth a 70:30 cost sharing formula. However, the then deputy chairman of Planning Commission (now NITI Aayog) Montek Singh Ahluwalia was not ready for it. However, Lalu Prasad Yadav made it a prestige issue and finally the Centre and State government settled for a new 60:40 formula. Vilasrao Deshmukh also agreed to this new cost sharing method following which ‘Special Status’ was accorded to the project. In fact, this project is a fallout of coordinated efforts of the people thinking positively about the development. Former chief minister Devendra Fadnavis too raised this issue and also released a major share of funds due from Maharashtra government without any hassles. He had set up a war room for expediting pending projects, in which the Wardha-Yavatmal-Nanded railway line project was included too. Now funds for this project must be made available immediately.

Q: Union finance minister Nirmala Sitharaman had made budgetary provision for the project. What is its status?
A: Some provision is made by both the Centre and the State government but that is not enough. Today, the cost of the project has snowballed to over Rs 3,000 crore. Therefore, immediate infusion of funds is necessary. Due to grant of special status to the project, now the State government and the Centre can divert other funds for this project. In fact, they should find alternate ways to finance the project. Recently, I met the railways minister Aswini Vaishnaw. He exuded a lot of energy and positivity about the project. He has also given concrete assurance to make efforts for augmenting fund availability for the project. If this ambitious project does not go on stream soon, the cost would escalate further. What is more important about the project is that it is essential for the development of the backward region, rather than who gets credit for it. Hence, special funds for the project should be released immediately.

Q: Due to inordinate delay in the execution, the cost of the project has escalated from Rs 274.55 crore to Rs 3,168 crore? Should accountability be fixed for this?
A: Yes, certainly. The cost of the project goes up if it is held up indefinitely. Alongside, job opportunities for a whole generation vanish. Other projects also get affected. The expenditure on Wardha-Yavatmal-Nanded project is incurred from the taxpayers’ money. Hence, delay should be probed and responsibility fixed. The guilty should be penalised. Only then, no project in future would be inordinately delayed.

Q: Is the project held up due to land acquisition issues? Is it true?
A: Some 305.82 hectares of land is yet to be acquired for the project, of which 251 hectares is located in Yavatmal district alone. In many other districts, land acquisition is on the verge of completion. Earth related works from Wardha to Yavatmal districts have been completed. On this 284-km route, there are about 27 railway stations, three of which are old. Civil construction work of these railway stations is also in progress. If every stakeholder from administration to the government exhibits willpower, the work would be completed soon.

Q: Along with track construction, would the route be electrified?
A: As it is, the project is delayed inordinately. Under such conditions, if electrification of railway route starts alongside track construction, operationalisation of trains on this route would be possible sooner than later.

Q: Forest Act is also one of the hurdles? What should be done to deal with it?
A: Some 251 hectares of land yet to be acquired is in Yavatmal district alone. As 143.43 hectares of land is in forest area, the acquisition work has hit a roadblock. Apart from this, work on the 2.5-km tunnel at Ghoti between Kalamb and Yavatmal and that on five tunnels in Nanded district too has come to a halt. Similarly, acquisition of 15 hectares of land in Wardha, 19 hectares in Hingoli and five hectares of land in Nanded is yet to be done. The State government has sought intervention of the Centre to get rid of cumbersome Forest Act in many other projects. The State government should approach the Centre in respect of this project too.

‘I had dreamt of the project from school days’
The chairman of editorial board of Lokmat Media and former member of Rajya Sabha Vijay Darda during a lengthy discussion on Wardha-Yavatmal-Nanded railway project, recalled the struggle to take the project to its logical conclusion. He said ever since his school days he would hear only one thing: When would we get the broad gauge railway line. The seeds for waging a long struggle for the railway line were sown during that period. During the British Raj, cotton from Yavatmal would be shipped to far away Manchester only due to the rail connectivity. With a view to achieve goals of regional development, I started raising voice for the said rail route in Rajya Sabha beginning 1998. Following a prolonged struggle of 10 years, the then railways minister Lalu Prasad Yadav announced the project in 2008. However, following this, the problems arose regarding cost sharing between the Centre and the State government. The issue however, was resolved following the initiative of the then chief minister Vilasrao Deshmukh and Lalu Prasad Yadav. Vijay Darda categorically said he is of the firm belief that Yavatmal is a backward district. And if the district is connected to the mainstream of development, growth would get a fillip.

The survey conducted prior to the announcement of the project has emphasised that the said project would add momentum to the development of the whole region. That is why he has focussed on the completion of the project and made efforts to ensure budgetary provision for the project every year. He said he has been meeting the railways minister regularly in this connection. Only recently, he called on the railways minister Ashwini Vaishnaw who exuded positivity about the project. Prime Minister Narendra Modi is nowadays taking a review of every project. It is hoped that he takes concrete steps in respect of this project too.

The project at a glance 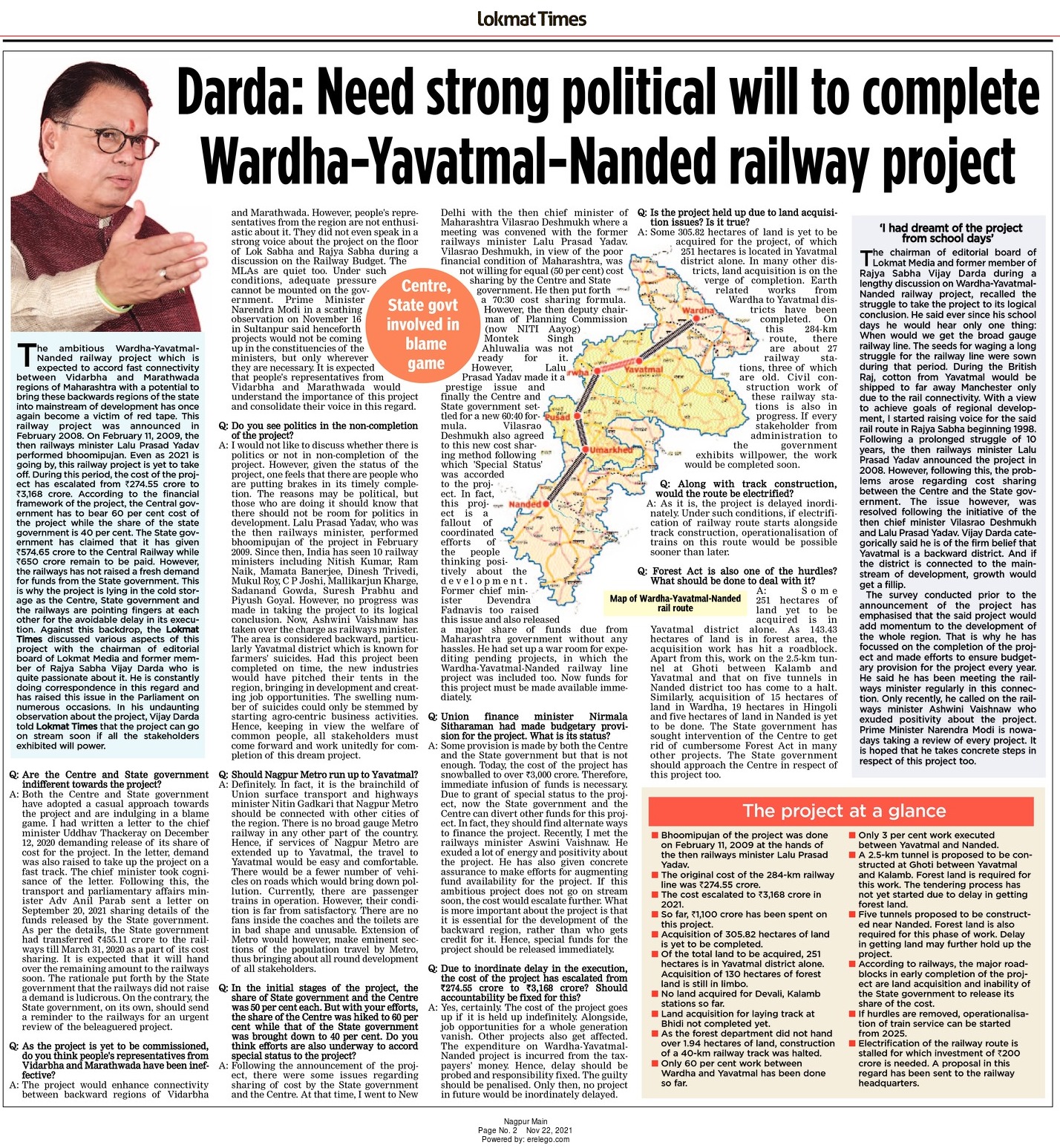